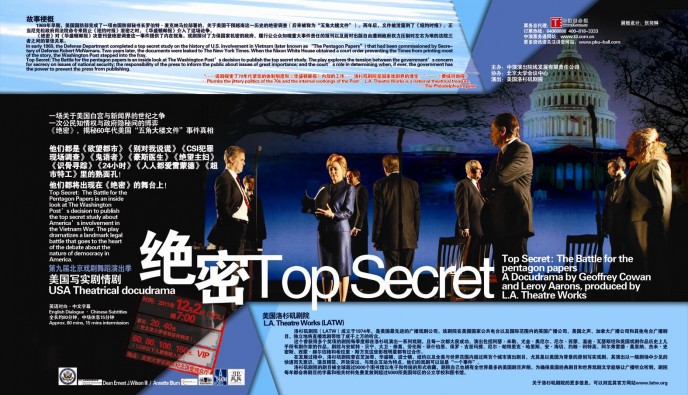 Based on interviews and trial transcripts, Top Secret tells the inside story of the Washington Post’s 1971 decision to publish the pentagon papers. The play recently concluded a 10-day, 3-city tour in China. Read More →

A copy of the speech, edited for publication, can be downloaded by clicking on the image below:

The recent tour of Top Secret in China has received attention from media outlets all over the world. Below are links to the coverage:

Chinese Allow Play on Pentagon Papers, but Not a Talk About It

In this short clip, the United States Consul General in Shanghai talks about the timeless message of Top Secret in a toast at a reception for the Top Secret cast and team at his apartment.

Top Secret: The Battle for the Pentagon Papers, a docu-drama co-written by CCLP director Geoffrey Cowan and the late Leroy Aarons, was performed in China in November and December 2011. The L.A. Theatre Works production was performed in Shanghai, Beijing, and Guangzhou. The tour was sponsored by the U.S. Embassy and the USC Annenberg School for Communication & Journalism. Top Secret was last presented during a successful Off-Broadway run at New York Theatre Workshop in 2010.

In conjunction with performances, CCLP presented post-performance discussions with Cowan and other special guests in partnership with China’s leading law and journalism schools. This provided a valuable opportunity to contextualize the content of the play, which is authentically American, within Chinese society.

November 29 – 30, 2011 / Guangzhou
Two performances at Sun Yat-Sen University
Panel discussions with Cowan about the role of journalists and journalism in society

“The Pentagon Papers” as a term references the 7,000-page, 47-volume, 2.5 million-word product of the ‘Vietnam History Task Force’. Read More →

The Supreme Court decided on First Amendment Grounds that prior restraint could not prevent publication of the Pentagon Papers, even though the information related to defense and national security. Read More →

Government leaks of confidential information can be self-interested, done in the interest of one’s superior, or made as attacks against other figures or departments. Read More →

The right to publish the Pentagon Papers was viewed as a triumph for free press, but the press’s constant duty to deal carefully with national security has led to many other moments of conflict with the government. Read More →