At the invitation of 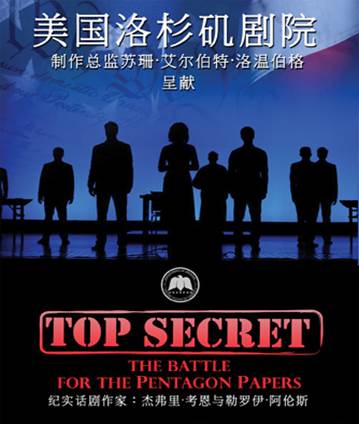 Beijng’s National Centre for the Performing Arts and sponsored in part by the U.S. Embassy in Beijingand the U.S. Department of State, L.A. Theatre Works (LATW) returns to China in June, 2013 with CCLP director Geoffrey Cowan’s riveting historical drama, Top Secret: The Battle for The Pentagon Papers. LATW toured China with Top Secret in 2011, playing to sold out houses of Chinese professionals and students.

USC Annenberg’s Center on Communication Leadership & Policy has produced a series of educational conversations around these performances.

L.A. Theatre Works will be the first American theater company to perform at the National Centre for the Performing Arts in Beijing, China’s leading performing arts center (“The Egg”). Additional tour venues include the Tianjin Grand Theater as well as major venues in Hangzhou, Suzhou, Chongqing and Fuling.

Due to its historic debut on June 4, 2013 the play is receiving national press reviews noting the significance of the content in juxtaposition with the location.

According to The Atlantic:

The play is scheduled for a three-night run at Beijing’s National Centre for the Performing Arts in June, the first time any American play has appeared inside the grande dame of Chinese music and theater. It’s also set for performances in Tianjin, Hangzhou, Suzhou, Fuling, and Chongqing.

According to The New York Times:

Even more surprising is the fact that the play is back again in China, and this time it is being performed in Beijing at the National Center for the Performing Arts, which, just west of Tiananmen Square, is the most prestigious venue of its kind in China.

“I watched the play Top Secret from Los Angeles Theater Works. There were only 13 actors and the stage property could not be simpler. However, it contains profound messages that are worth thinking.”

“It’s my first time to watch a play in English. I was able to skip the script screen and catch with the pace of the performance (since the script didn’t follow the performance). The plot was compact and full of humor. The actors from those familiar TV series were terrific. It surprised me that I could watch it on the first floor even though my ticket was on the second.”

“Yesterday, the artists from Los Angeles Theater Works gave us an amazing play, Top Secret: The Battle for The Pentagon Papers. It allowed the audience of Tianjin to have an opportunity to closely experience the American politics, media, law and culture. After the performance, the director, producing director and the actors answered the questions from the audience. The interaction was friendly and of high standard. It was impressive that the beautiful lady from the theater spoke perfect Chinese.”

The play concludes it’s run on June 10, 2013 at the Fuling Grand Theatre in Chongqing.

Top Secret: The Battle for the Pentagon Papers in China is produced by L.A. Theatre Works and Ping Pong Productions (www.pingpongarts.org), whose mission is to promote cultural diplomacy through the performing arts.

“The Pentagon Papers” as a term references the 7,000-page, 47-volume, 2.5 million-word product of the ‘Vietnam History Task Force’. Read More →

The Supreme Court decided on First Amendment Grounds that prior restraint could not prevent publication of the Pentagon Papers, even though the information related to defense and national security. Read More →

Government leaks of confidential information can be self-interested, done in the interest of one’s superior, or made as attacks against other figures or departments. Read More →

The right to publish the Pentagon Papers was viewed as a triumph for free press, but the press’s constant duty to deal carefully with national security has led to many other moments of conflict with the government. Read More →